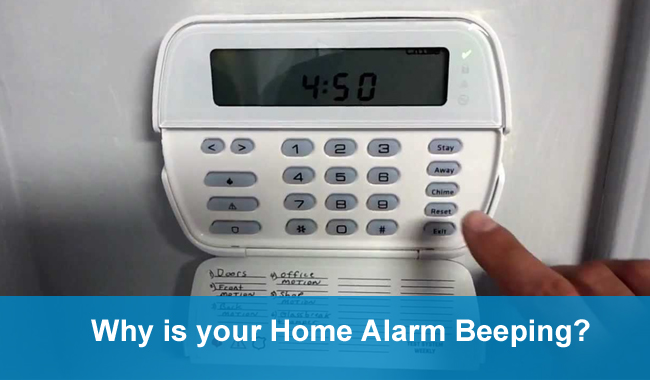 A faulty alarm at home keeps beeping until it is taken off. This fault generally causes the alarm code pad to emit a beeping sound. The errors may generally occur due to power fail or low panel battery but it has more reasons which to faulty errors.

Is it the Alarm beep?

Warning beeps are often for every electronic device, so it may not be an error beep! Most e-devices will give a notification if an error occurs or else the user manual comes handy at times to tackle fewer issues like the meaning of unusual lights/ icons. A button can be pressed on the alarm code pad for testing the tone emitted if it’s the same or beeping. A single tone can only be emitted from alarm code pads.

Moreover, if a case arises where no fault light or icon is present and the emitted tone by the code pad is different from the beeping, then it might not be the case of alarm fault.

The next case is when the battery fails, and then the smoke detector needs to be checked and confirmed to determine the cause so that no doubt remains. And if there is confusion, then the change of the smoke detector battery is mandated. The rest of the reasons include not shutting the fridge door properly, cordless phone off-hook or not charging, low battery toys and gadgets.

An alarm is a complex device with regulatory checks and measures from time to time. If the alarm keeps beeping continuously, the warning arriving may lead to less effectiveness of the device or damaging of the device.

Lastly, all the above-mentioned information, in general, may not be relative to every type of alarms. Uses and faults differ according to their types. A technician is required always to have the corrections in time.

The upgraded and advanced alarm systems are often considered to be the front-line security maintainers.…

Everything you need to know about changing the battery of the alarm system!!

Does your alarm monitor system have dim light? Or have you faced issues with the…

An Alarm System Increases the Value of your Home

*Disclaimer: iAlarm is not affiliated with nor endorsed by Robert Bosch GmbH, Bosch Ltd. or any related subsidiaries in any way. iAlarm specialise in the fast and effective installation, repair and maintenance of Bosch security products and alarm systems, as well as providing customers with official Bosch products and merchandise.
Copyright © 2021 ialarm.com.au. All right reserved. A division of Pacific security technology Pty Ltd, Master Licence: 408770551 Privacy Policy
Back To Top